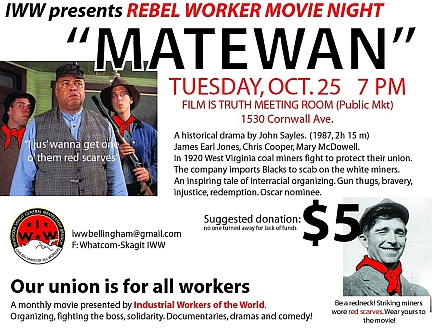 Tuesday, 7 PM, Public Market Building Meeting Room [behind the Film is Truth counter]. $5 suggested donation, proceeds to the IWW organizing fund. No one turned away for lack of funds.

MATEWAN [1987] is a drama about the 1920 mine wars in West Virginia. White miners are fighting coal company thugs to protect their union. Then the company tries to import black strikebreakers to foment racial tensions. You can imagine the potential for nastiness. A union organizer tries to get the white and black miners together into the union. It is a great tale of bravery, gun thugs, and injustice. There are several shoot outs and anti-union violence.
Starring James Earl Jones, Chris Cooper, Mary McDowell. Directed by John Sayles. Nominated for an Oscar.
The miners wore red neckerchiefs to distinguish themselves from the comp;any gunmen, and called themselves Rednecks. You can be a Redneck too: Wear your red bandana!
FREE ADMISSION. FEEL FREE TO DONATE $5 to IWW ORGANIZING FUND
Seats are metal folding chairs. Consider bringing a small pillow. The film is 2 h 15 m.

This entry was posted in Uncategorized. Bookmark the permalink.