IWW union organizing began in Bellingham in 1906, only one year after the IWW was founded in Chicago. The earliest references we have are to our union opposing the AFL-driven expulsion of the Sikh cannery workers from Bellingham in 1906. E know IWW was organizing all around northwest Washington in the lumber and construction industries, including at the Bloedel-Donovan Lumber Mill. The IWW Construction Workers union working on the Baker River Dam at Concrete WA struck in 1923.

We will update this page as we have time and information. Historic IWW records from the Bellingham offices were stolen or destroyed by the nationwide FBI raids on IWW halls on September 5, 1917. See ‘Trial of the Century’ below. 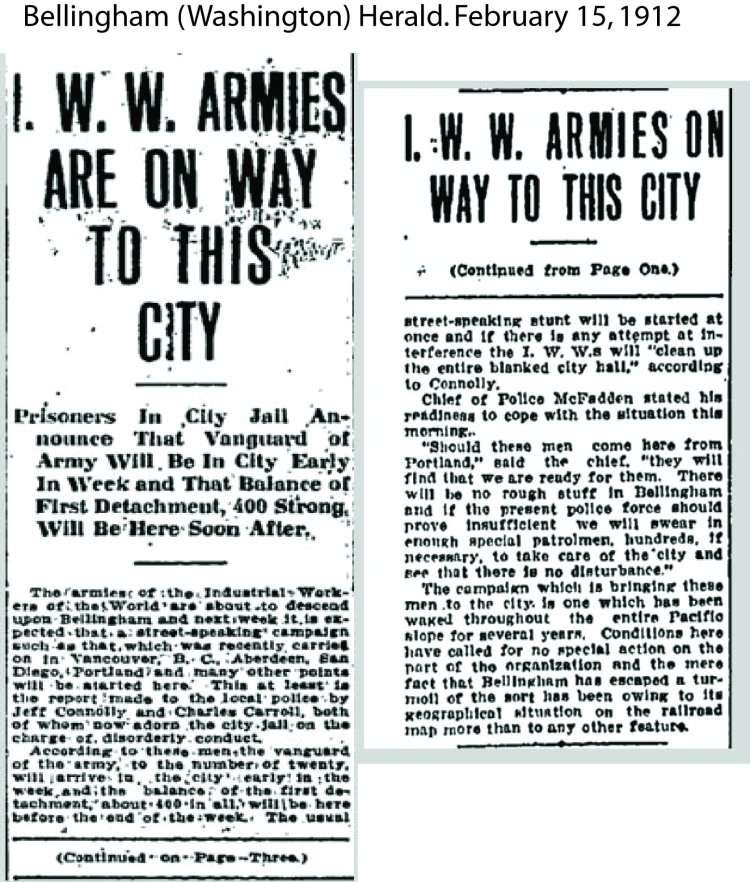 From Howard Zinn’s A People’s History of the United States, we have this passage to share with you:

“In early September 1917, Department of Justice agents made simultaneous raids on forty-eight IWW meeting halls across the country… 165 IWW leaders were arrested for conspiring to hinder the draft, encourage desertion… One hundred and one went on trial in April 1918; it lasted five months, the longest criminal trial in American history up to that time… One IWW man told the court:

‘You ask me why the I.W.W. is not patriotic to the United States. If you were a bum without a blanket; if you had left your wife and kids when you went west for a job, and had never located them since; if your job had never kept you long enough in a place to qualify  to vote; if you slept in a lousy, sour bunkhouse, and ate food just as rotten as they could give you and get by with it; if the deputy sheriffs shot your cooking cans full of holes and spilled your grub on the ground; if your wages were lowered on you when the bosses thought they had you down; if there was one law for Ford, Suhr, and Mooney, and another for Harry Thaw; if every person who represented law and order and the nation beat you up, railroaded you to jail, and the good Christian people cheered and told them to go to it, how in hell do you expect a man to be patriotic? This war is a business man’s war and we don’t see why we should go out and get shot in order to save the lovely state of affairs that we now enjoy.’

The jury found them all guilty. [Big Bill] Haywood jumped bail and fled to revolutionary Russia, where he remained until his death ten years later.” (pgs. 372-373)